Tesla Price Prediction For 2023 – Just What Is TSLA Stock Going To Do?

Author
Tim Worstall
|Updated January 16, 2023 06:07
225
Table of Content
Tesla Stock – Factors That Will Influence The PriceWe've Got To Do This Ourselves – Tesla Requires ThatWill EVs Actually Conquer The Market?What’s the Macroeconomic Effect On Tesla?Both Inflation And Interest Rates MatterTesla Price PredictionsThe TSLA Conclusion

We'd all like to know what the price of Tesla (NASDAQ: TSLA) is going to be in December 2023. Obviously, we could buy or sell now and just wait for December to roll around and cash in. Sadly, investing is rather more difficult than that – there's a marked absence of crystal balls available.

One problem we have here is that the estimates, and projects, for Tesla from the market professionals are in such a wide range that they're of no use at all. That range is from $85 to $450. That's so useless it doesn't even tell us whether to buy or sell. So, we'll have to do our own hard work and think through it all.

Tesla Stock – Factors That Will Influence The Price

The macroeconomy. Higher interest rates will reduce the relative value of TSLA. So will higher inflation. Lower than expected either will increase

Competition from other new EV companies – Nio, Rivian, Fisker, how well will they perform? The legacy auto companies, how fast will GM, Ford, VW, enter the EV market in volume?

A wild card from Porsche – will synthgasoline prove to be a viable, large-scale, source?

The one that worries many, is how much of Elon Musk's time will Twitter take? 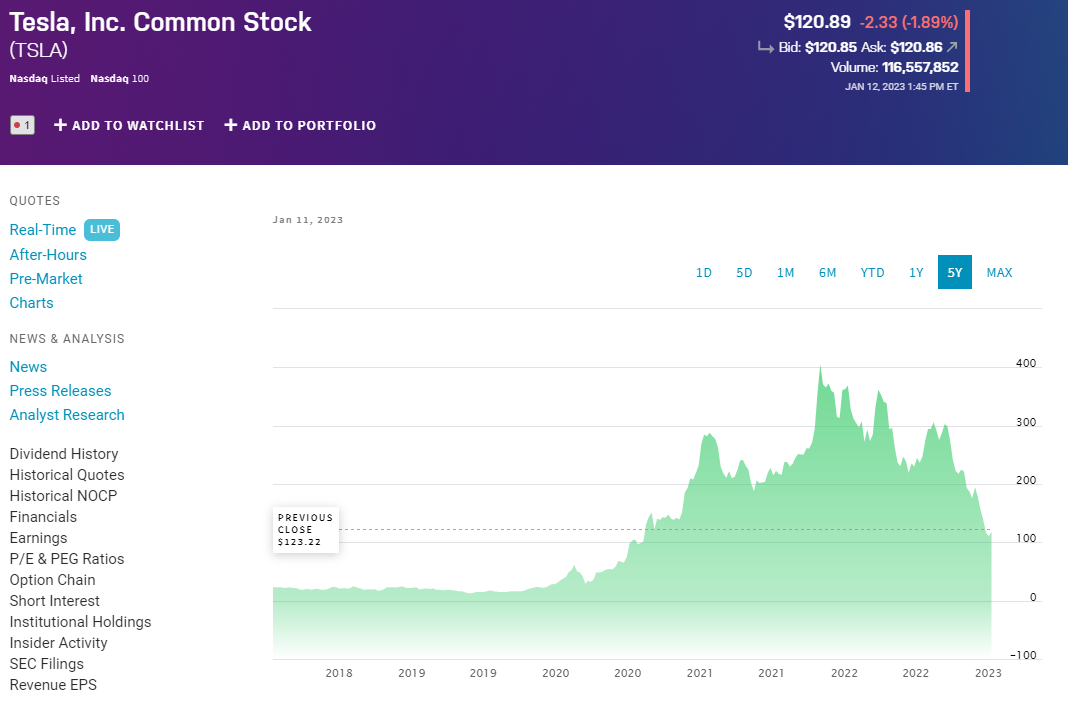 As we all know TSLA is in the business of making electric vehicles. It's also run by one of the finer entrepreneurs and capitalists of our time, Elon Musk. That doesn't mean it's all going to come well because as the saying goes, even Homer nods.

But what it does mean is that the traditional methods of valuation don't really work. P/E Ratios, earnings per share, and so on, they're just not the right metrics to be used in trying to reach a price forecast.

Quite apart from anything else the recent Tesla share price – as shown in that chart – hasn't paid any attention to any of those things so there's little to make us think that the future will do so. This is much more about emotion and general economic conditions than it is about detailed numbers.

We've Got To Do This Ourselves – Tesla Requires That

Those mainstream predictions are so wildly variable that they're of no use to us. So, we need to have a look at those influencing factors and try to work this out for ourselves. To go through that list in reverse order.

Twitter is a problem but this works both ways. Yes, it's a problem for us as Tesla shareholders that he now has a new toy. I take it to be obvious that he's going to do the emergency surgery himself and then appoint someone else as CEO. But that's my opinion and not one you have to share.

The other thing though, that is important. Musk has sold $20 billion and more of TSLA stock this past year or so. That's a lot, obviously. Some of it was to pay the taxes on his past options awards which matured. Some were, seemingly, to increase the amount of cash and capital he had available for Twitter. Well, that's pretty much over now – so that actually reduces one of the significant selling pressures on TSLA stock.

Will EVs Actually Conquer The Market?

Again, this is a very personal view but I think there's a horse coming up on the inside straight here. Porsche has announced that it's making synthgasoline, synthpetrol. The numbers look a bit high still - $2 a litre for gasoline. But that is about what Europe currently pays (including tax) and dependent upon electricity prices could be cheaper than EV fuelling right now.

I take it as being canonical that manufacturing costs decline over time – I expect the cost of renewable electricity to gasoline price to decline substantially from this, first, pilot plant. That is very much a wild card though. Perhaps not something that should dictate our Tesla forecast for this year but something to keep alive in our thought processes.

What About Other EV Makers?

Let us assume that the EV market continues as it is, expanding massively – that is, green hydrogen to petrol, as with Porsche, doesn't keep ICEs on the road. Our next consideration has to be well, how well are the legacy car companies going to do in this market?

VW deliberately floated off part of Porsche in order to raise the capital to fund that move. GM, Ford, in fact, all the rest of them, are dashing in that direction. So, when Tesla is no longer the only EV mass manufacturer, when it faces competition, how well is it going to do?

The recent success of TSLA has been largely through being the only mass manufacturer. When those others that have the distribution networks, the capital, really enter the market then how well will Tesla do?

Unknowable, obviously, but something we need to have a view upon. It's also not possible for us to just say well, they're not going to be big in the market this coming year. That's not how it works. Markets are forward-looking so if it is thought that VW – say, and just as an example – were to be big here in 2025, that would push the value of Tesla down in 2023.

Something similar can be said about the other EV specialists trying to enter the market. Nio (NYSE: NIO) and Rivian (NASDAQ: RIVN) might have had the most disastrous share price trajectories recently but that's not really, wholly the point we have to consider. Leaving aside the ICE manufacturers switching to EVs, we also need to consider the EV specialists trying to reach manufacturing size, just as TSLA did. Well, how likely is this? Nikola we know about it, but how many of the many competitors might manage it? Fisker?

Opinions will differ about each of these and I'm in that camp that thinks Tesla did have something special that they're unlikely to achieve. But lots of competition is still lots of competition, it impacts prices and margins whether or not those competitors are ultimately successful.

What’s the Macroeconomic Effect On Tesla?

Finally, in our list of factors, there're those macroeconomic factors. These don't depend upon management, technology, or even the vehicle market. Inflation and interest rates are general across the entire investing market. We also know about them, and have seen them working before, so in one sense the uncertainty is lower.

The higher inflation goes, the higher interest rates do, and the more money now is valuable as against promises of money in the future. This is why mature fast moving consumer goods companies and utilities are the traditional safe investments in stagflationary times. A company that's paying a good dividend – several percentage points – just is more valuable relative to a growth company promising dividends and returns at some point in the future.

Do note this is true even if that growth company succeeds. For the statement is not that Tesla is less valuable, some cigarette companies are more – but that the mature dividend payer is worth more relative to Tesla. One reason we know this is true even this time around is that Elon Musk just told us so.

Both Inflation And Interest Rates Matter

Both inflation and higher interest rates make money now worth more than money in the future. By exactly and precisely what the interest and inflation rates are in fact. So, if those rates change then relative values change.

Sure, we know that inflation is high at the moment. We also know that the Federal Reserve is raising interest rates to head it off at the pass. So, in our forward-looking markets, we have some assumptions about what those are going to be in the future. But are those assumptions correct?

If inflation falls faster than the market – and the Fed – expects then interest rates will peak lower than the current general expectation built into prices. That makes Tesla undervalued as against reality. Or, of course, it's possible to think that reversing the effects of money printing is going to be more difficult and so the reverse is true.

Each of these factors needs to be weighed and a conclusion reached as to the overall effect.

The general set of Tesla price predictions from the analyst market is positive. As above that doesn't help us much as the range is from a 30% fall to a near 400% rise. The median is positive but the range, well, less impressive.

It's also true that the median estimate has been positive right throughout the near 60% fall in recent months. As Analysts' thoughts on Tesla were also very much on the low side during the grand surge of recent years.

Another way of putting this is that the Tesla stock price is driven more by enthusiasm and feelings than traditional stock analysis methods.

Yes, of course, we'd all like to know where the Tesla price is going to be at the end of 2023. Knowing that isn't one of the pieces of knowledge available to us. What we can do though is think through the varied influences that will determine what that value is. Which is, sadly, what we need to do.

TSLA is a large enough company that it's now subject to both macroeconomic factors and also that microeconomic competition in its own markets. Therefore we've got to work through both sets of possible influences. 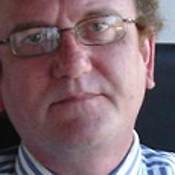 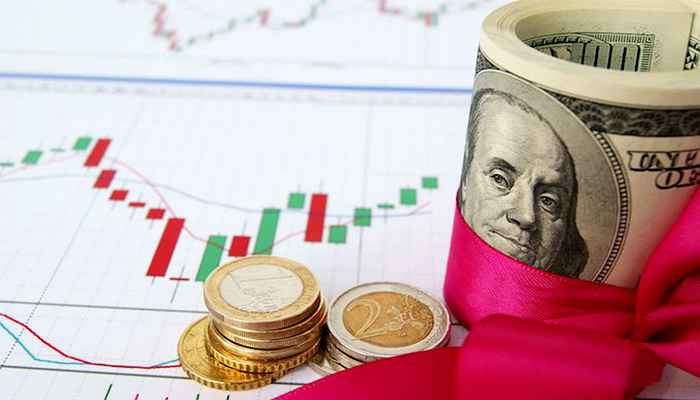