Stop Loss: Your Savior In The Market

I might have traded for many years but whenever the word “Stop Loss” is mentioned, it brings up a mixture of reactions.

The most obvious one, even for you, is that whenever our stop losses are hit, we are not happy. We all want profitable trades, plus, nobody is happy when the market takes away some of their money.

On the brighter side, I am happy whenever I see the damages that I would have acquired if a stop loss had not been in place.

In light of this, this article is going to see the importance of a stop loss and how this simple tool helps us in our trading.

The most typical use of a stop loss is to reduce the potential loss that a trader can make in one trade.

We are taught that whenever we have a running trade, it should always be protected using a stop loss. It is common knowledge that there is never a surety that the market will go as per our predicted direction. Therefore, we put a stop in place to reduce the losses in the event that the market opposes us. 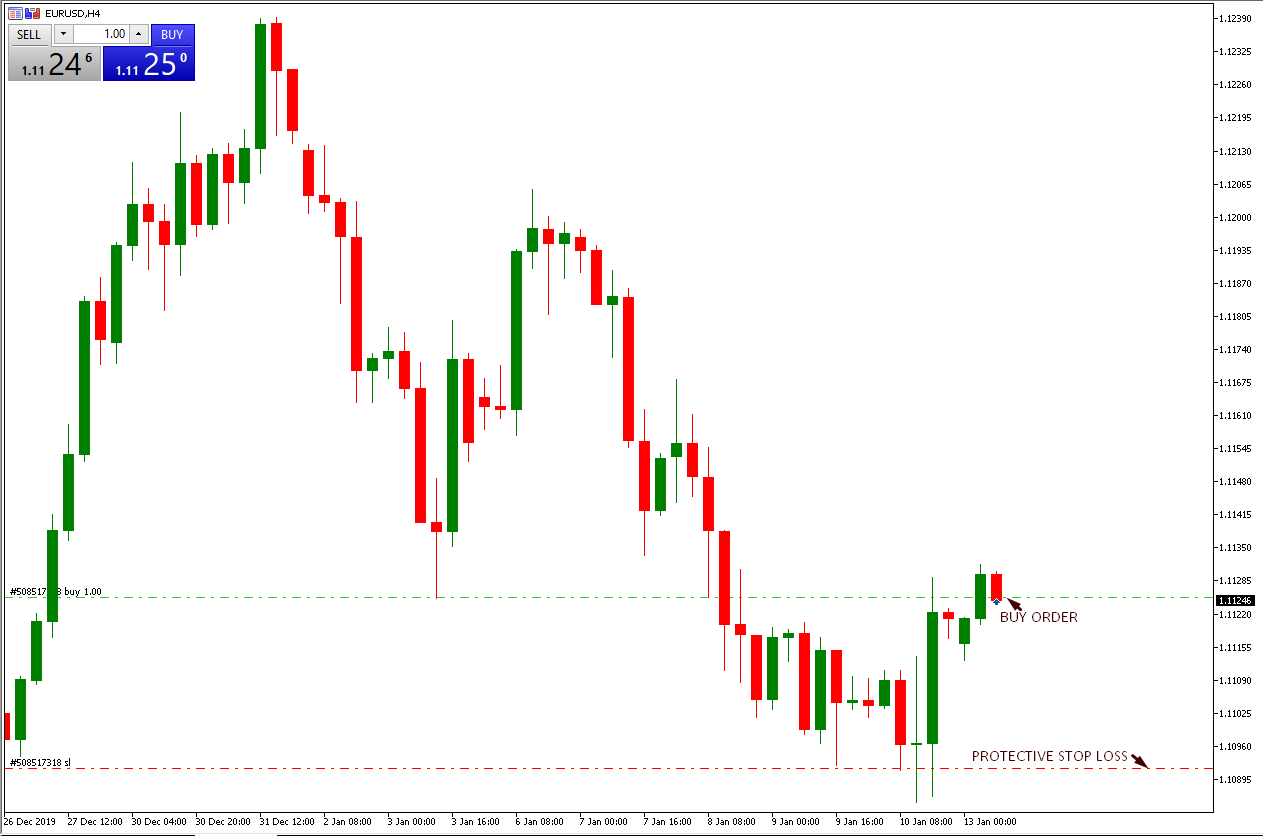 Setting a stop loss helps a lot, especially during high-impact events. If you were a trader in 2015, then you probably know about the EURCHF flash crash that made some traders and brokers super-rich while others went bankrupt in under 30 minutes.

See the chart below on how the crash appeared on the charts: 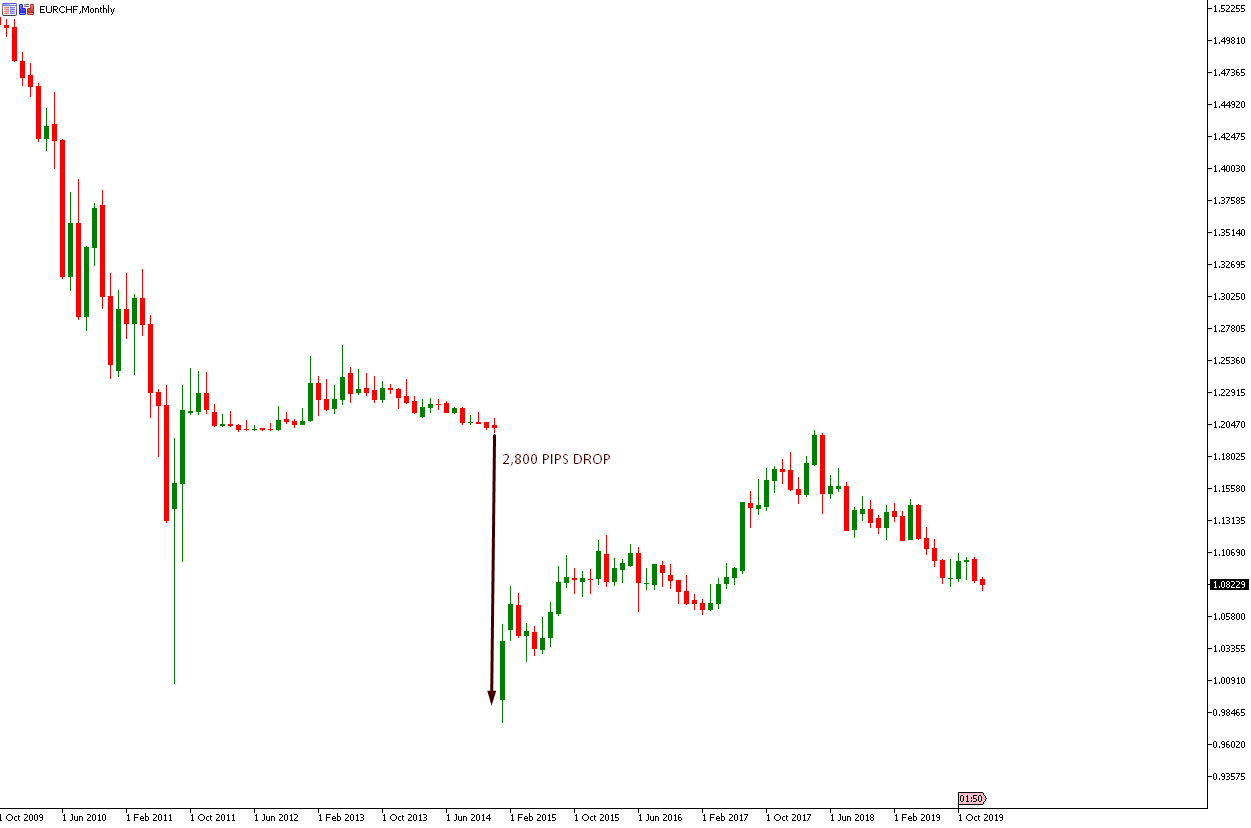 The gap that you are seeing in the chart was worth 2,800 pips. It occurred in just 30 minutes. Assume that you had been on a buy trade without a stop loss. How much would the 2800 pips cost you?

Events like the above are inevitable in the market, yet they come without a warning. To be safe from extensive losses like the above, always use a protective stop loss.

The other popular use of a stop loss is to measure the risk versus the potential return of a trade.

This is an advanced trading approach where a trader measures how much trade can offer them before taking it. The only way to calculate this is by determining the size of the stop loss and comparing it to the size of the take profit.

Let’s see some examples below. 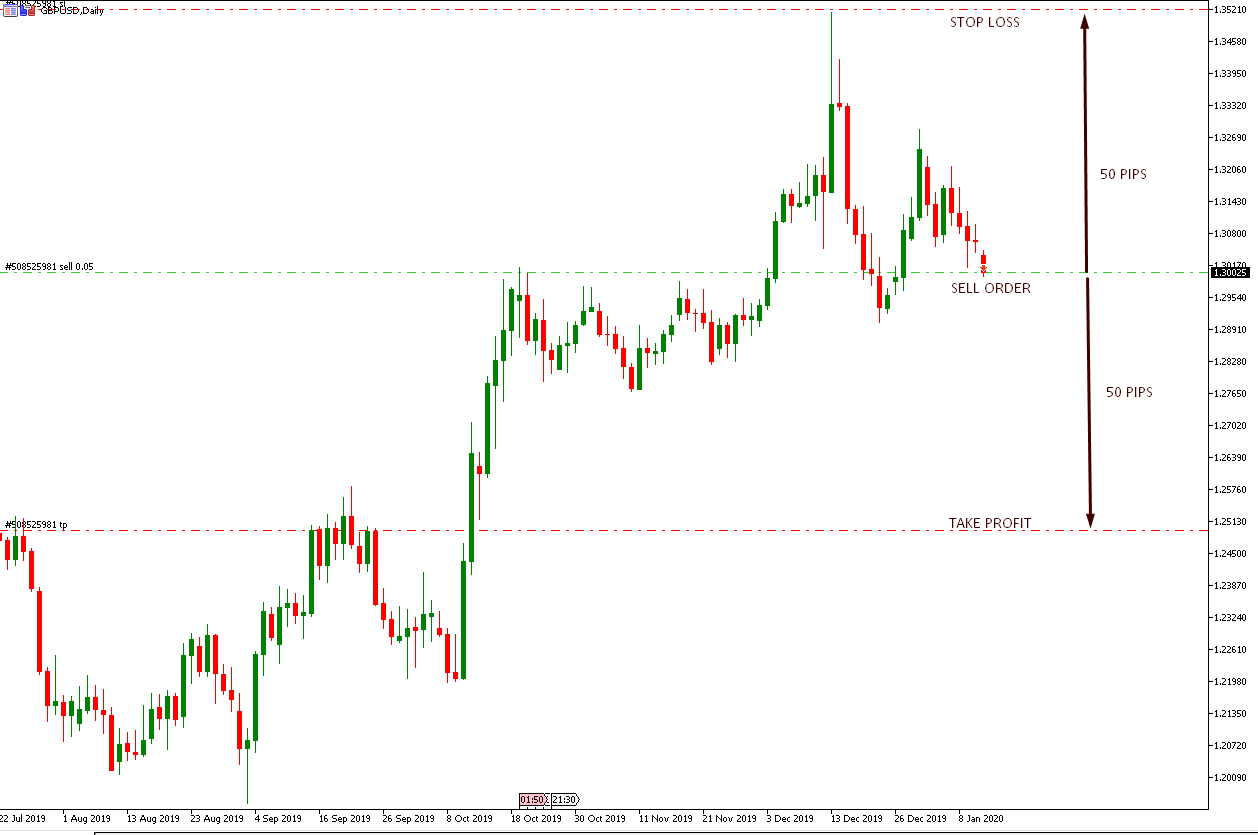 Below is the same trade, but with a bigger take profit distance. 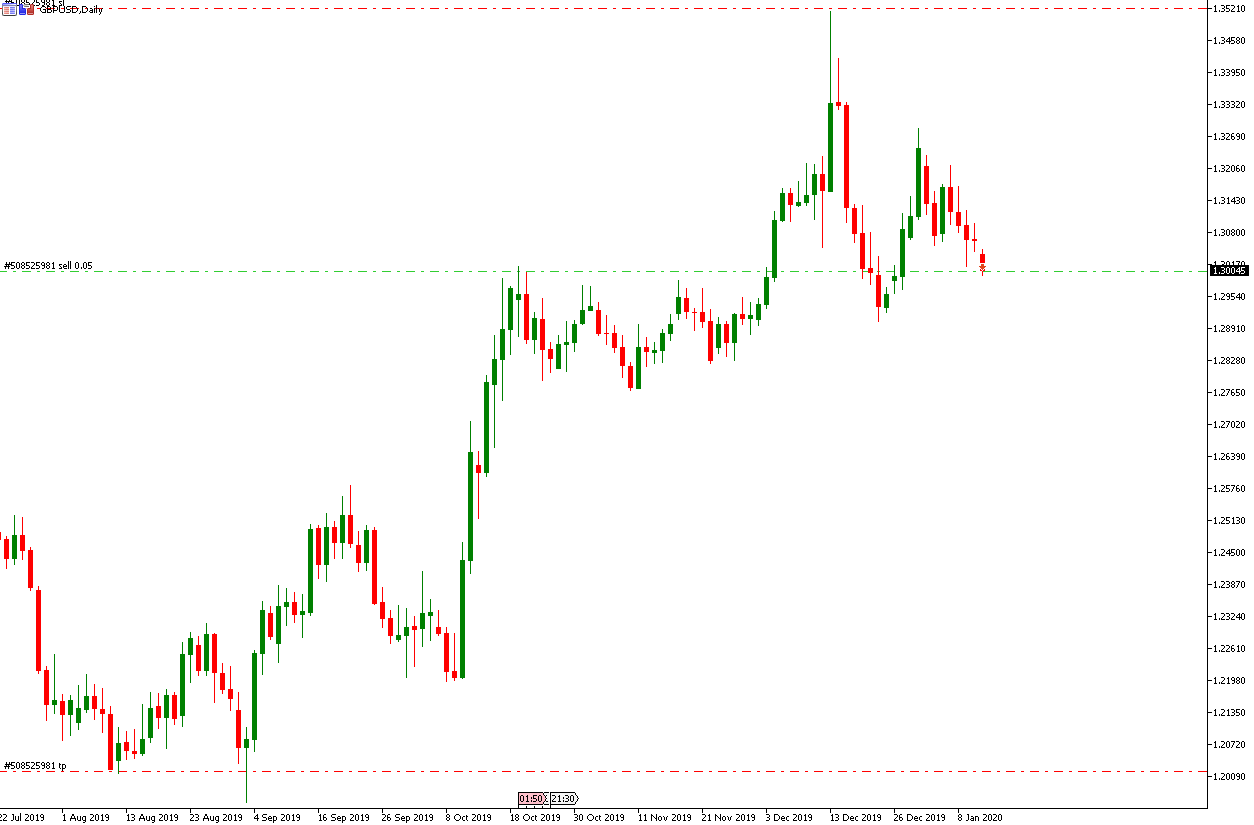 This time, the trader stands to make more than double what they are risking, thanks to the stop loss.

In a nutshell, without a stop loss, we would not be able to tell the good trades from the poor ones.

During weekends and some public holidays, the markets are either closed or are very slow. This, however, doesn’t mean that no financial transactions occur. Stocks are sold and bought, money is exchanged, exports and imports are done, and everything else that occurs on a normal day on planet earth.

So, when the markets are frozen and the brokers do not provide us with the feed, there are chances that “gaps” will form when the markets reopen. At times, the activity is so volatile that the brokers cannot display it using bar charts, line charts of candlesticks. When this happens, we have an empty area in the charts, and that is what we call a gap. 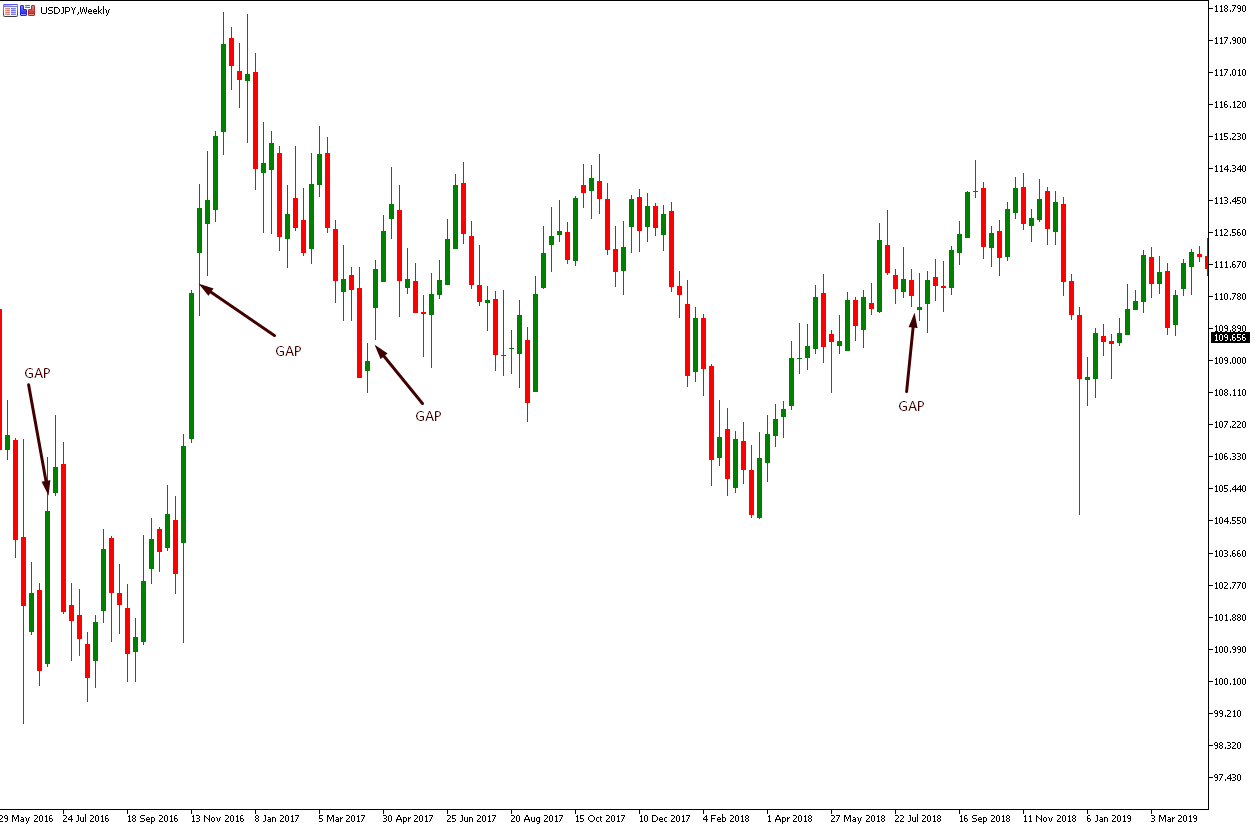 The gaps are risky if you have an active trade then they form in the opposite direction to your prediction. Since the data is not available for us during the frozen markets, we cannot adjust our trades.

So, what happens? If you had no stop loss, then you wake up to huge losses that might hurt your account. Conversely, if you had a stop loss, it would have been activated during the closed market and kept you safe!

Did you know that there are some brokers that might allow your losses to exceed your account balance?

For instance, you might have $200 in your account, then, due to some factors such as overleveraging, huge lot size or market crashes, all the money is gone. Now, some brokers will not automatically close your trade once the balance is gone.

Instead, they allow the losses to continue so you end up with a negative account balance. For example, you might find that your account reads -$150. This means that the next time you deposit, they will first deduct the $150. So bad, right?

Now, to prevent this, you can always place a stop loss where your potential balance might be zero. In this way, if an unfortunate event occurred, you would only lose what you have and not become indebted to your broker.

The other option is to use a broker that offers Negative Balance Protection such as Mitrade.

Apart from preventing losses, a stop-loss order can also protect your profits!

We have a special stop loss order known as a “trailing stop.” You set it such that when the market moves X pips in your direction, then it locks the profits for you. In the event that the market started opposing you, the trailing stop will be activated and you will not lose your existing profits. 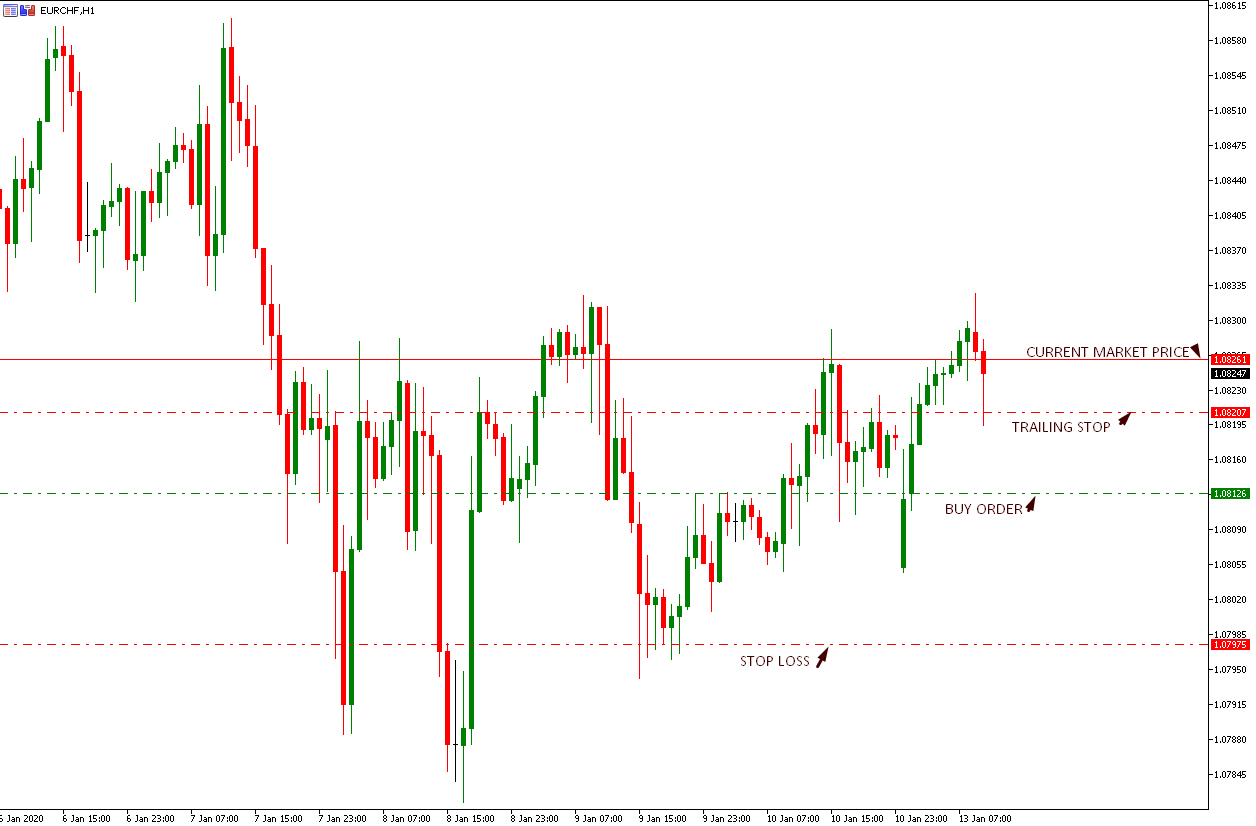 From the chart, you can see how a trailing stop loss works:

>   You can also set the trailing stop to move to the trade entry point (breakeven) such that even if the market turned back, you would only exit with 0 profits and 0 losses.

>   If the market went up to 40 pips, the trailing stop will then book another 10 pips. So, the trader will have booked 20 pips already even if the market opposed them.

This is a rather interesting use of the stop loss.

However, you should be careful not to make it too tight as it might lead to the premature exit of an otherwise good trade.

The truth about trading is that we can never get rid of our emotions completely. However, we can reduce them; and using a stop loss is a proven way of doing it.

If you trade without a stop loss, you will have many worries in mind such as, “Where will the market go?”, “How far will it move before turning back?”, “How much will I lose if it moves all the way to here?”, “Can I leave this trade running overnight?

In fact, you will find yourself checking the charts when you turn in your sleep. If you are traveling, then you will be constantly checking to see if the market is going for or against you.

Enter the stop loss. Once it has been set, the only question that you will have in your mind is, “Did the market hit my stop loss or my take profit?” In this way, you will not have to keep looking at the charts in fear or anticipation.

I will never get tired of reminding you that a stop loss is one of your best companions in your trading career.

Finally, that stop loss will act as your watchman.

What I mean is that when you are away from the charts, it will automatically stop any excess losses. Therefore, you can sleep well or do other activities away from the trading station without worrying about what might happen to your account.

You will be so comfortable that even if someone said there was high volatility news or a flash crash occurred, it would not bother you. Reason? A stop loss is in place to stop any extensive losses.

Please note that a trailing stop only works when your charts are open and online. If you need to use it while you are away, invest in a good VPS so that your charts always remain active.

A stop loss is a very simple tool to use that is activated by just dragging your order line in the opposite direction of your trade prediction. Simple as it is, many traders still ignore it. Do not be them, now that you have seen how much it can be of use to your trading.

In addition to minimizing your losses, it can also protect your account balance, help in finding the best trades, and also lock in the profits that you have already made without closing the trade.

Just think of the stop loss as a car safety belt; you hope that you will never have to use it. However, you will still be happy to know that in the event that it had to be used, it will protect you from serious harm or death.