What Drives The Gold Price In Australian Dollar (AUD)?

With stock markets plunging, fear gauges like the VIX soaring, it has been an interesting time to say the least for traders and investors.

One of the early beneficiaries of the stock panic was gold. At times the metal acts as a safe haven. As markets fell and investors bought the metal, sending it much higher, close to $1900 a troy ounce, but what does all this mean if you're in Australia and your domestic currency is Aussie dollars?

This article will explain the fundamentals that are currently driving both gold and the Australian dollar, helping you make an informed decision on how to trade here at Mitrade.

Since the end of the second world war, and the signing of the Bretton Woods agreement the US dollar has been the world’s reserve currency. All strategic commodities on the world markets are priced in dollars, be it, oil, copper, silver, or gold.

For many years the gold price was set at $35 an ounce. Owning it was illegal as a US citizen but foreign holders of US dollars were able to exchange them for an ounce of gold for one dollar. This all changed in 1971.

The French president, Charles De Gaulle recognized risks in holding too many dollars and was rapidly exchanging them for the metal, which was starting to fly out of Fort Knox - much to the alarm of President Nixon.

And so, in 1971, the gold window was closed, and no longer could anyone exchange their dollars for gold. Rampant inflation due to the Vietnam war, and two oil price shocks in quick succession, saw the gold price rise from $35 an ounce to a price high of $850 in 1980. After this large price spike, the metal went into a 20-year bear market, finally bottoming in the early 2000s.

And once again started rising, first slowly and later much quicker. This is where we found ourselved today, with gold trading between $1700 and $1900 a troy ounce.

What About the Gold Price in Australian Dollars?

In fact, in Aussie dollars terms, gold is actually at an all-time high! This means, as an Australian-based investor you’d have had a better return on your investment in gold than a US investor would have.

Look at the table below to see the performance of both two currencies against gold since 2014.

In all but 2017, the gold price in AUD outperformed gold in USD.

The gold price AUD is currently hitting new highs of over $2500. Why Measure Gold In Different Currencies?

To answer this question we need to look at the driving forces behind gold, the Aussie dollar, and the US dollar.

For FX traders though, measuring gold in different currencies is vital. It’s not always easy to judge the performance of one currency against another - so gold acts at the perfect calibration.

It's probably both. But to what extent? Not always easy to tell.

But if instead, we value our Aussie dollars (or other currency) against gold, a clearer picture soon emerges.

Gold is a neutral asset

This means no central bank can print it out of thin air.

It has no interest rate component.

It cannot be affected by monetary or fiscal policy.

In short, the supply of gold is fairly static compared to currency.

The only thing that could affect gold supply so quickly is if an alchemist was to find the secret to turn lead into gold – and let’s face it, that isn't likely to happen any time soon!

Gold acts as a neutral asset that we can use to gauge a currency's true performance. So, what has been happening of late with the performance of gold in Aud?

As can be seen below. But, from mid-2019 the price broke out of the long trading range and in just over a year has surpassed $2400 an ounce. 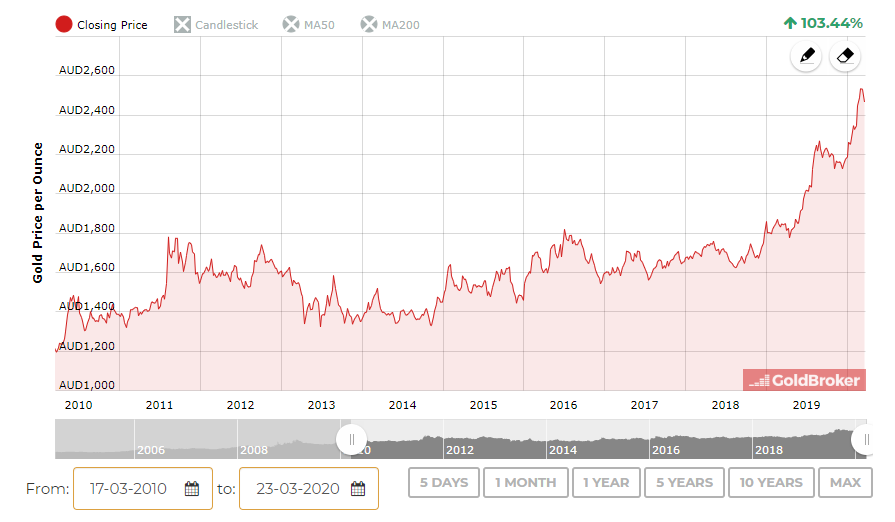 The five-year chart gives a better picture of its breakout in 2019. 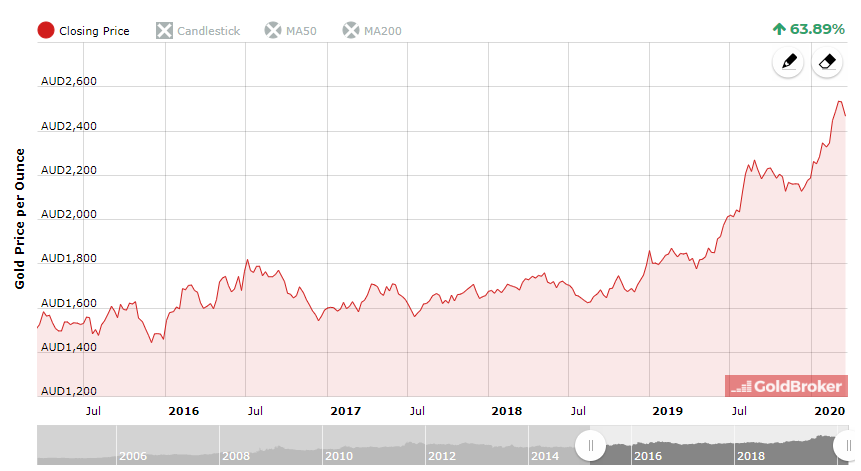 And in the one-year chart, it can be seen even clearer the uptrending gold price in AUD. 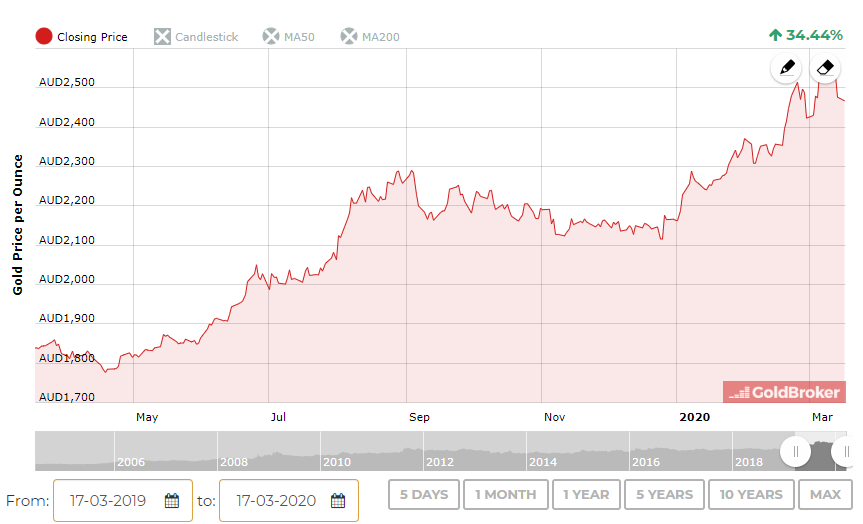 What Drives The Gold Price In Australian Dollars ( AUD)?

Many of the factors that affect gold are the same whether you measure the metal in USD or AUD. Below are the reasons why the demand for gold right now is high and why it is likely to remain high for some time to come.

As a long-term investment gold has multiple benefits. It has a lower volatility profile than either stocks or bonds and is a non-correlated asset to both. This makes it popular with institutional investors, like large pension funds, who prefer slow and stable gains to their asset allocation mix.

Shunned as an alternative investment for a long time, gold only really came into the mainstream with the advent of gold-backed ETFs. Hedge funds and mutual funds have been major holders of gold in ETF form, and this shift has seen gold demand investment grow on average 14% a year from 2001.

The gold-backed ETFs now hold 2900 tons of shiny metal. Making them among the biggest holders of gold in the world.

Investment demand for gold is a growing trend and not likely to end soon.

Central banks have been net buyers of gold since 2010. This has been led by emerging market money authorities with record purchases of nearly 700 tons of gold.

2019 saw strong purchases of gold from the central banks of  Russia, Turkey, Kazakhstan, Poland, and Hungary. The outlook for 2020 remains similar with central banks looking to diversify their excess dollar holdings.

Recognizing the severity of the ongoing Coronavirus crisis, the RBA cut rates to a record low of 0.5%. In its policy statement, it said it was ready to drop rates further and was also standing by to pump as much liquidity into the market as need be.

Since deadly Coronavirus emerged and is now taking a grip of America and much of the western world, this has affected service sector businesses hard, and there has been a massive spike in unemployment claims.

What options did the central banks of the world have other than to print money? Probably none.

And because of all this, it will likely be gold that is the major beneficiary.

●  The US Dollar And The Australian Dollar 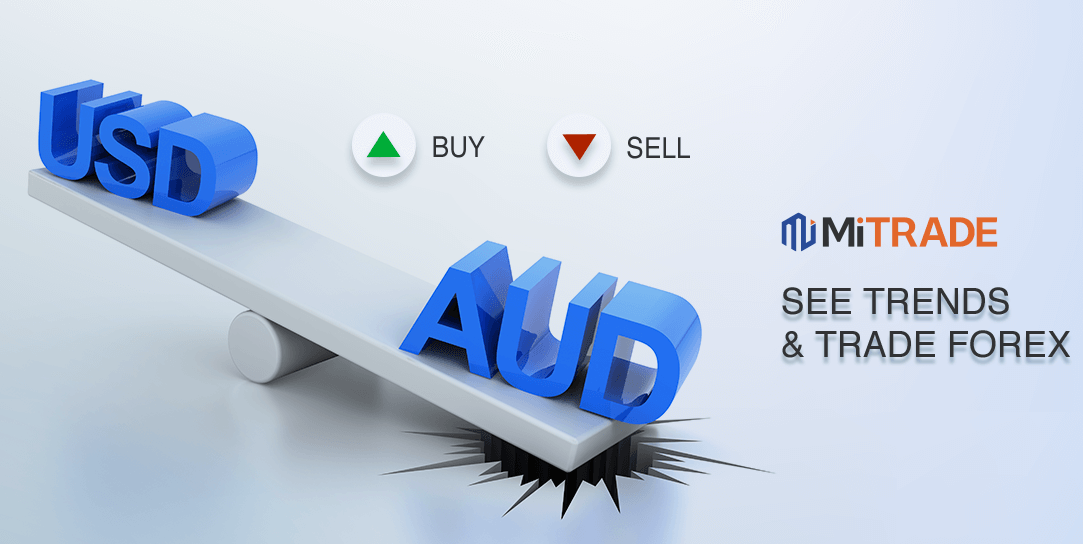 As with the last financial crisis, there is currently a scramble for US dollars. This is likely to be short-term in nature but such has been the need for dollars it has accelerated downward pressure on the AUD/USD.

Whether we like it or not, the US dollar is still the reserve currency of the world, and as was proven during the Lehman Brothers crisis, during shocks to the financial system, there is a run to the US dollar.

While interest rate differentials are currently in favor of the AUD with such a dramatic slow-down in China, global markets in turmoil, and problems in the credit markets, the US dollar is acting as a safe haven for now.

This is also reflected in the gold price in AUD terms.

Is It A Good Time To Trade Gold In AUD?

Strong momentum markets get stronger, not weaker. But, does that mean it's the right time to buy gold if you're an Australian investor? ( XAU/AUD)?

Not sure of that either.

Traders and investors need to be buying markets once they’ve pulled back in uptrends, not when they're pushing new all-time highs. The best way is to open a demo account, and follow the markets and wait for the trading opportunity.

You can trade XAUUSD online with 0 commission and low spreads at Mitrade app and webtrader. 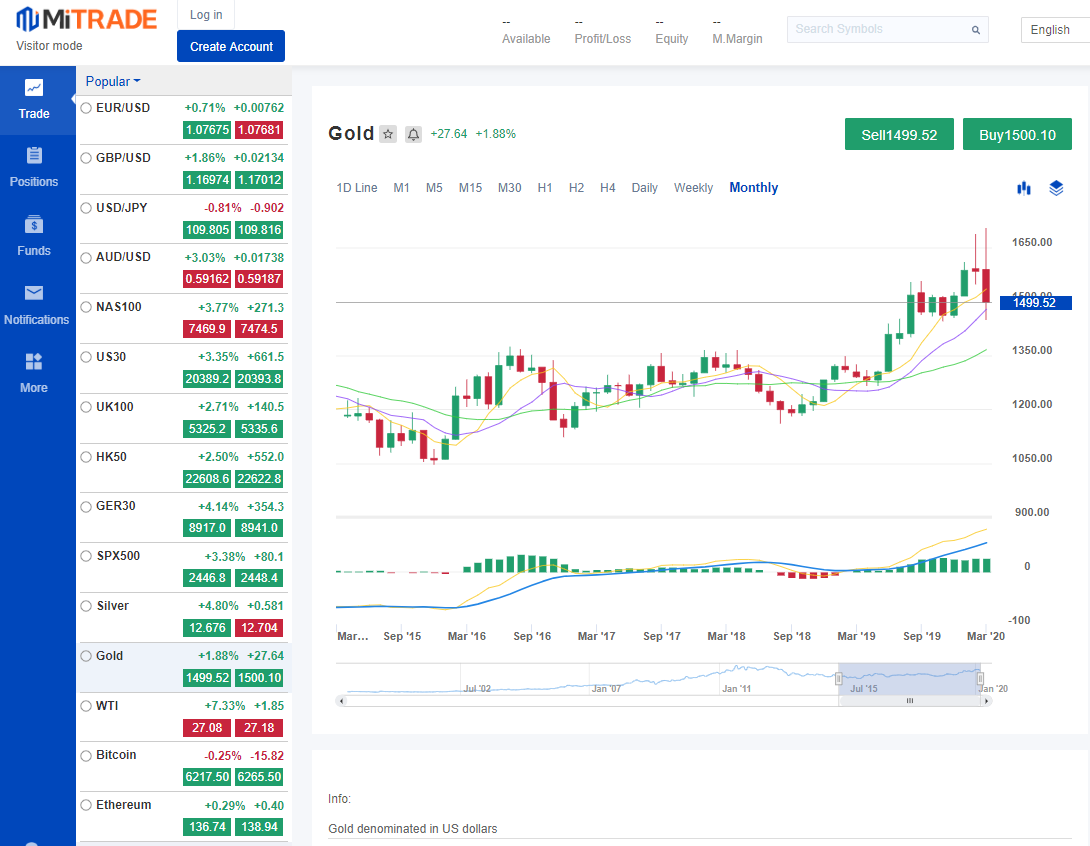 If gold is in a long-term bull market (which this author seriously thinks it is) then it will not be too long before the gold price USD is once again moving higher.

Want To Join The Gold Market?

Finding opportunities in their rising value OR their drop with trading Gold derivatives - contracts that track their change in value (CFDs) !

Mitrade is a regulated Forex CFD broker. Its trading platform is a user-friendly state-of-the-art platform allowing you to trade markets from Forex to commodities to stock indices.

For more details, please check the mitrade website or go straight to the trading page.

Hopefully, this article has given you an idea of the drivers behind the gold price in AUD.

If you want to know more about how to trade gold online as a professional trader read here.

If you want to see trading strategies and free demo trading, please sign up for our multi-asset trading platform. We offer trading on 300+ the world's most popular assets.

9 Best Ways To Invest In Gold In Australia

Crude Oil Investing: How To Trade Crude Oil With CFD